This seminar draws our attention to something researchers describe as „the discovery of the obvious“: every instance of communication is (and has always been) multimodal. Although verbal language might seem the most obvious means of communication, there are other semiotic resources people additionally draw on when, for instance, composing a newspaper article, shooting a film, designing advertisements or IKEA furniture, giving firm handshakes or soft air-kisses. In this introductory class we will scrutinize multimodality from both a theoretical and an empirical perspective. By discussing key research papers in multimodality studies, we shall lay the foundations for many empirical investigations of static, dynamic, spatial, temporal, and/or interactive examples of multimodal texts that we’ll find in- and outside the classroom.

The advent of the Internet has changed human communication drastically. Along with and dependent on technical development, new communicative patterns have emerged such as emailing, chatting, blogging or vlogging. Although some of these practices still show quite a number of parallels to offline communication – emails resemble letters and a blog may remind us of a diary, they are distinctively new with regards to a number of other features. Computer-mediated communication is a very exiting research object for text and discourse linguistics. Established descriptive tools such as multimodal genre analysis, theoretical approaches to politeness, audience design, or word-formation patterns serve to “ride the rough waves of genre research” on the web. They deliver fascinating insights into those communicative practices all of us engage in on a daily basis: on Facebook, on Twitter, on WhatsApp – and by signing up for this class 😉

Some 650 years ago, mediaeval writer Geoffrey Chaucer captured his impression of language as an ‘ever-whirling wheel’ in the following lines of Troylus and Criseyde II:

Ye knowe ek, that in forme of speche is chaunge
Withinne a thousand yer, and wordes tho
That hadden prys now wonder nyce and straunge
Us thenketh hem, and yet they spake hem so.
And spedde as wel in love as men now do.

You know also that in (the) form of speech is change
Within a thousand years, and words then
That had value, now wonderfully curious and strange
(To) us they seem, and yet they spoke them so,
And succeeded as well in love as men now do.

Ever since its early beginnings, about 1,500 years ago, the English language has changed tremendously and serves as a fascinating example for thinking about processes of language change more generally. Used by people on a day-to-day basis in changing socio-historical environments, languages are in a constant state of flux: Words and phrases become fashionable and might seem outdated some decades later. Grammatical structures, once compulsory, become redundant and might disappear. Pronunciation patterns might change as words roll over many people’s tongues. Sometimes, languages even cease to exist while others emerge.
In this class, we will shed light on language change by the example of the English language and the changes it has undergone over time. Putting an emphasis on both developments dating back to historical varieties of English (Old English, Middle English, Early Modern English) as well as changes observable in our times, we will look at manifestations of language change at different levels of linguistic description, e.g. changes in pronunciation, grammar, the lexicon, spelling. Apart from the question of how languages change, we will look at why they do so by dealing with language-internal (e.g. structural instability) and language-external factors (e.g. language contact) that initiate change.
By the end of term, we will have acquired knowledge about the shapes and sounds of earlier forms of English as well as the processes that have caused them to change into what we know as English today.

The advent of the Internet has changed human communication drastically. Along with and dependent on technical development, new communicative patterns have emerged such as emailing, chatting, blogging or vlogging. Although some of these practices still show quite a number of parallels to offline communication – emails resemble letters and a blog may remind us of a diary, they are distinctively new with regards to a number of other features. Computer-mediated communication is a very exiting research object for text and discourse linguistics. Established descriptive tools such as multimodal genre analysis, theoretical approaches to politeness, audience design, or word-formation patterns serve to “ride the rough waves of genre research” on the web. They deliver fascinating insights into those communicative practices all of us engage in on a daily basis: on Facebook, on Twitter, on WhatsApp – and by signing up for this class.

“Gosh, semantics totally jargogles my mind!” Even though we may find semantics difficult to grasp, we are not likely to use ‘jargogle’ to refer to our ‘confused’ state of mind; to us, ‘jargogle’ is nothing more but a non-sense string of letters. Thus, it contrasts with a vast range of meaningful words that we store in our minds and dictionaries to describe both ‘puzzle-‘ and ‘enlightenment’, and the shades in between. Semantics is a branch of linguistics which systematically studies those ‘meaningful’ entries in a language’s lexicon.
In this class, we will and come to terms with the seemingly slippery notion of meaning. Having sketched out the broader picture of meaning-making with the help of semiotic concepts such as symbolic, iconic and indexical signs, we will delve into the realms of linguistic description. Here, as a first step, we will make use of ‘sense,’ ‘reference,’ ‘intension,’ ‘extension,’ ‘denotation,’ and ‘connotation’ as tools to pinpoint the semantic potential of single words. Terms like ‘synonymy,’ ‘antonymy,’ ‘hyponymy’ or ‘meronymy’ shall serve to relate individual concepts to one another to form more complex structures within the language system. As a second step, we will move by approaching semantics from a cognitive perspective as we deal with ‘Prototype Theory,’ ‘metaphor’ and ‘metonymy’. Finally, we will link up semantics to other areas of linguistic description such as morphology and historical linguistics.
By the end of term, we will be capable of describing why and how words mean something to us as we encounter them in our everyday lives – and we will also be able to trace how words change their meaning over time, or even loose it. Our example of ‘jargogle’ belongs here since the verb used to denote ‘to confuse’ but got extinct some 300 years ago. Knowing this, our introductory sentence is rendered meaningful. Chances are good, however, that, as you complete the class, statements like these will no longer be needed anyway.

Each year, an uncountable number of new English words is coined; some are spontaneous formations to fulfil communicative needs. If you wish, for instance, to create a word for ‘a photograph taken by yourself of your suntanned legs to show that you are enjoying your holiday’, you could simply come up with the word ‘legsie’ – which people did, and it caught on. Some of these creations are then recorded in the Oxford English Dictionary, such as ‘double-double,’ ‘muffin top,’ or ‘koozie’.
In this class, we will deal with words like these and describe the linguistic processes of word-building they result from, e.g. compounding, prefixation, suffixation, blending, or clipping. In this context, we will address the productivity of individual processes, and a word’s spread within language communities from its creation to lexicalisation. In addition to processes of word-formation, we will look at the formation of word-forms via inflectional morphology. By the end of term, we will be familiar with different ways how words come into being, we will be able to analyse the internal structure of various old and new words that we encounter in our everyday lives, and certainly we will have created some of our own that might find their ways into future dictionaries.

The English language comes in many shapes and sounds. In this class, we will shed light on differences and similarities between regional (and social) accents and dialects regarding their pronunciation, grammatical features, and lexical characteristics.
Using regional varieties of English in the British Isles as an example for an in-depth discussion, we will broaden the perspective over the course of term and take into account that English has developed into a pluricentric language ever since it began to spread around the globe some 500 years ago. We will therefore explore selected standard and non-standard varieties of English in the United States, Australia, and the Caribbean. We shall round off our discussion by returning to London whose linguistic landscape – due to processes of migration and the formation of e.g. a Jamaican diaspora – has become ever more diverse.
We will study the linguistic features of accents and dialects by means of many practical in-class activities such as analysing audio recordings and extracts taken from contemporary TV productions and films. By the end of term, we will be able to describe and explain – among many other things – where and why speakers of English double their negatives and drop their aitches.

Whenever we use language to speak or write, we make choices – most of them being unconscious, rather than conscious. The way we use language is greatly dependent on where we are from, what educational or geographic background we have, how old we are, and who we are talking to in a particular situation. Sociolinguistics is a branch of linguistics that explores these (and other) influencing factors and, thereby, describes language variation, its causes and results. In this class, we will discuss variations in language use (e.g. regarding pronunciation, word choice, or grammatical structure) under the headings of, e.g. ‘accents and dialects’, ‘language and identity’, ‘language and gender’, or ‘politeness’. We will also turn to ‘language change’ which may come about as a result of language variation. Whereas most of the examples we will be looking at are verbal, we will also consider non-verbal means of communication, such as pictures or gestures, which are social phenomena just the same.
By the end of term, we will be able to explain – among many other things – why we might choose to speak in dialect when in a local pub, or might decide to greet someone by doing a chest bump instead of shaking hands.

Essays written by participants as part of their coursework

Luzie Ilgner, 2nd semester, “Is the construction of someone’s identity becoming visual instead of linguistic? Developing an identity in the age of Facebook”

In addition to academic expertise, it becomes increasingly important to acquire practical skills such as project management and event planning in order to prepare for future employment. This project course provides students with the opportunity of conceptualising, planning and hosting an academic conference at the Department of English and American studies at Halle University.
During our monthly meetings, students will learn all about the requirements, challenges and excitements of organizing an academic event: conference formats, writing a “call for papers” and selecting talks, public relations & funding, moderating conference panels and discussions as well as catering.
We are looking to host the second Gradumeeting at the Department of English and American Studies at Halle-University in April 2015. The first Gradumeeting took place in April this year. It provided graduate students with the opportunity to present their degree theses to an audience, and encourage critical discussions about their topics, their methods, and the challenge of writing their papers. The conference was a great success and encouraged a dialogue between students of all levels as well as lecturers of the department.
Students will receive an individual reference letter which can be beneficial to future job and scholarship applications. 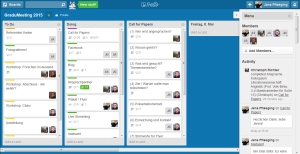 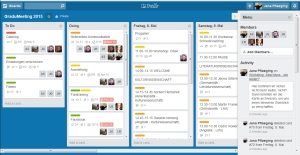